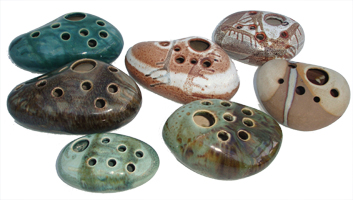 Pebble vases were made in large numbers at Tremaen and were very popular with tourists. They came in a wide range of different sizes, shapes and colours and were decorative, but as flower vases, not really functional. A series of small holes surrounded a much larger hole which may have been a requirement for the removal of unwanted waste inside the vase. They were usually highly glazed and shone like real pebbles you would find in shallow coastal waters. They look best when grouped together. 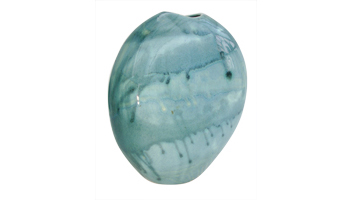 Early moon vases were made in moulded halves that were joined together. The seam on the outside was smoothed over but it was difficult to work on the inside because of the narrow opening to the pot. The pots were heavy with a thick layer of clay, particularly at the bottom.

Later versions, made in slip moulds, were much lighter and required less finishing off before glazing. 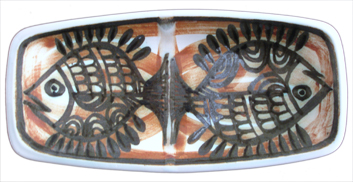 Press moulded, shallow dishes were made at Tremaen in a range of different sizes, shapes and colours. They were usually decorated with stylised fishes but, on occasions, with abstract designs.

Small slab or press moulded vases were made in large numbers for the tourist market.